On the 22nd August 2019, there was an outcry in the UK about the possibility of the proposed High Speed (HS2) rail link between London and the northern part of the England being scrapped. So far nearly £7billion had been spent on the HS2 and the project is likely to cost more if scrapped. On the other hand, the cost of the project will increase by as much as £23 billion from the original cost of £35billion.
The numbers are huge https://www.bbc.co.uk/news/uk-politics-49420332

This reminded me of several forgotten or wasted projects across many countries. I saw the old federal secretariat in Lagos, Nigeria. This complex used to house several hundred civil servants until they were moved to the new capital in Abuja. The complex was sold to a private company for housing development, but a dispute between the Lagos state government and the federal government meant the complex has been left to rot whilst many people remain homeless in Lagos. For a country struggling with money, wastage should at least be minimised.
https://punchng.com/restore-lagos-federal-secretariat-

Here is another project struggling to gather traction in Nigeria. The plan to build a mega and exclusive city to rival the best cities in the world started in 2003 before the recession of 2008 slowed down the pace of development. The planner forgot that finance is a big issue and that the people who need properties are mainly the middle class.

To embark on a project that less than a handful of people can afford is taking a huge risk. A plot of land in the new Eko Atlantic ( EAC) would set you back nearly a million dollars. An amount 98% of ordinary Nigerians are unlikely to accumulate in a life time. So who will be interested in buying properties in the new city?
The promotional video below shows that this is an ambitious project exclusively financed by the private sector. This means the project at least have a chance of being successful as more investors are drawn to the city.  https://www.ekoatlantic.com. 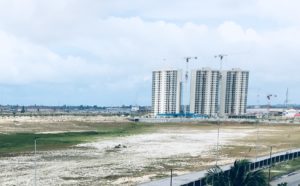 On my recent visit to the project, there was a slow down in activities within the new city, but the flats in EAC are not designed for the average Nigerian, these flats are for the super rich. A 3 bed flat will set you back around a $750,000 as can be seen from the link https://www.nigeriapropertycentre.com/for-sale/lagos/eko-atlantic-city

There are some benefits to the economic slowdown. The proposed prices  of the flats have fallen by more than 50%, but are the developers gambling on exclusivity or are they plainly greedy?. At the height of development in the UAE, there were flats going at around $200k, not so in this case.

Away from big projects, small business owners must also focus on turning their ideas into money and avoid wastage. I found many projects that were implemented not for their viability but the love of the owners. These are great projects, but money allows for completion and eventual success of the projects. A project that does not make money is unlikely to be successful and if not successful then the owners may lose not only the project, but their collaterals as well. A dream lost and there is no purpose to the country.

Across the world, there are several empty places that no one want to live in. In Angola, planners built a new city at the cost of over $3.5 billion that only a handful of people can afford, hence the city lies nearly empty.

https://youtu.be/EbPTknpQwu8
As a business owner, do you know if your project will help meet the needs of your customers and which part of your business is profitable? What is your profit margin? What about your turnover for last month or even last year? What % of your costs do you spend on staff or admin costs etc?. You need those numbers to run your business and to project your cash flow.

Many businesses who claimed to need funding may only need better planning on the implementation of their projects. Executing multiple capital projects may sound like a great idea, but in terms of cash, it might be better to complete one project before launching another and at least make sure that there is cash being generated that can then be invested in next project.