On my recent travel to Nigeria, I planned to visit Abuja, but a few hours before my flight, I received an email that my flight was going to be delayed by an hour or so. It was not a big issue, so I quickly rescheduled plans in Abuja.

Unfortunately, the one hour delay became much longer and as time passed, it became obvious over time that the flight was going to be a difficult one. Customers became more agitated and there were different stories about the conditions of the planes operated by the airline.

Many airlines do not want to tell customers the real reason for the delays in their flights. In case of DanaAir, there were safety issues a few years back, but most small airlines operating in Nigeria have only a handful of planes and any maintenance related issues definitely can lead to severe disruptions in their operations.

In all the confusion and angry exchanges that took place between the customers and the airline crew, there were some brave ladies who performed brilliantly. The desk ladies tried to explain as best as they could and took a lot of flack. There were angry exchanges and I imagined many of the senior managers took cover, but these incredibly brave ladies understood the customers frustrations and tried as best as they could to calm down the situation. 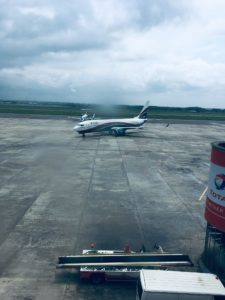 As a small business owner, a senior manager should have stepped in to explain the situation better, reason with the customers and if need be to provide some refreshments for some of the children at least. In this case, there was no chance of a compensation. The law needs to change to allow for airlines to make some amends where customers have been severely delayed.

To be fair to DanaAir, they tried to communicate but it was not precise enough and the airport is not comfortable enough for those long waits. The airline must understand that some people might have been on a tight budget, some with little children whose nappies needed changing or those with special needs. Small companies must care about their customers to develop a sense of brand loyalty. The flight finally took off more than 8 hours behind schedule with some of the rumours of lack of maintenance by the airline, I have never had a more uncomfortable flight. Every noise coming from the engine gave me some jitters.

After my ordeal on the outward flight and speaking to several other customers, I believe they might have lost a lot of customers and gain a load of bad publicity that will take time to put right. I did not use my return ticket and definitely will not fly with them again.
It is not the first time that my flight has been delayed, but I would rather know if it’s going to be a long delay so that I can try to relax rather than edgily waiting for the very unhelpful announcements from the public address system. My flights with Air peace, Air France and KLM have been severely delayed in the past and I still fly with them, but they acted quickly, provided responses and they were sympathetic to my needs.

Things don’t normally go to plan, as customers, we understand that but we want to be treated well even under difficult circumstances.

1 thought on “The importance of good communication and empathy”