The giants amongst us

The last week of June to the first weekend of July ( 28th June to 3rd July 2022) , I travelled to Henley on Thames and Reading, UK

I was impressed by the number of people who turned up for the annual event. I have seen the event on the TV a few times in the past. The regatta itself showed some of the great British traditions of boating and rowing. The Henley Regatta started in March 1839. It was a rowing event that only allowed men to compete and women seemed to take their revenge by dressing in beautiful flowery dresses. Thank goodness, times have changed as both men and women can now  compete.

I was completely blown away by the tradition that still continues today. There were as many  young and old, happy to continue this great tradition. I was impressed to see the statue of two great men who dominated the sport of rowing and brought the sport into the limelight because of their dedication and hard-work. Rowing until their arrival was a side sport known only to a few. These were the giants amongst us.

These giants; both men and women are the ones who walked the extra mile, got up earlier and went to bed later. They gave their time and energy to make a difference and changed the course of history. In the process, broke world records, did their little bit, but gave a little extra, did not quit when most of us would have given up. They ran slightly faster, or stayed a bit longer, love what they did enough to allow them to go the extra mile.

Women like Martina Navratilova ( had to mention her as I was watching tennis), Serena Williams; who having reached the age of 40 still continue to play tennis as the highest level and many more. One can only imagine the  hours of work that Sirs Redgrave and Pinsett put into rowing to give them the haul of gold medals they picked up during their Olympic careers.

I hope as many of us as possible will continue to emulate these giants. The ones who set the bar high,  for us to use as barometers to measure ourselves, put down the gauntlet, broke barriers, opened the windows of opportunities so that the rest of us can believe that everything is possible.

Like Sir Roger Bannister who showed us that we can run a mile in less than 4 minutes,  showed us that everything is possible through hard work. That hard work can lead us to achieve success. We can always learn from them and know that even though we all do not have to be giants, we can continue to work in our own little way to make the world a better place in our own little way.

If the above has gotten you into Henley mood, then, you can plan for next year 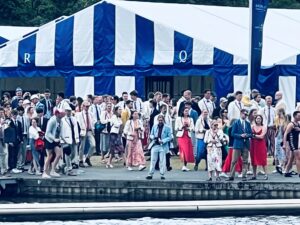 More to do at Henley

To find out more about the regatta, click on Home – Henley Royal Regatta (hrr.co.uk). There is also the Henley festival Henley Festival – 6th-10th July 2022 (henley-festival.co.uk). If you are wondering what happened to the former UK Prime Minister; well, she turned up at the Theresa May beams at Henley Festival after making speech about how politicians must ‘follow rules’ | Daily Mail Online

This weekend, there is the Traditional boat rally Thames Traditional Boat Festival (tradboatfestival.com). Yes, you guessed it, Henley is about boats.

If you are unable to make any of the above, you may still make the Reading festival Reading Festival | Richfield Avenue » 26 – 28 August 2022

This is a salute to the giants of yesterday, today and the future.

Helping others first is the golden rule